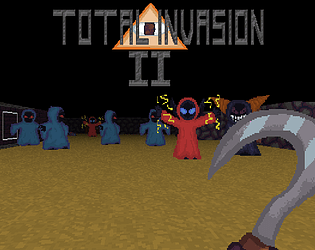 Wield rather impractical weapons such as:

Fight against a vast army of strange hooded folk (wraiths) that sound like they're drowning in a toilet.

Playing as a grumpy cat-girl soldier, your goal is to infiltrate the wraith home world and stop the invasion at its source. However, you may find that even fate itself is set against you.

A remake is currently in the works that will feature significant difficulty balances, improved controls and physics, and more content!

The game's engine was made "from scratch" using the low level graphics API OpenGL and some BlitzMax standard library functions. A few years later, I started to rewrite the engine to run in browsers with Javascript's WebGL functionalities. This port was not finished, and may never be finished, but I think it's neat.